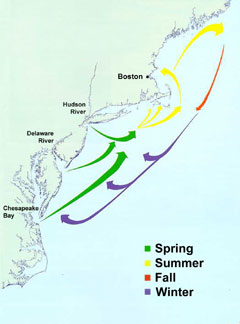 As fisherman we understand the importance of the environment and the the management of our natural resources.

Bob Boyle wasn’t the only notable early pioneer of

the HRFA. The following is an excerpt from the SUNY

College of Environmental Science and Forestry

ARTHUR GLOWKA has used his scientific and

ecological knowledge as a volunteer to muster citizen

support for environmental protection in the Hudson

River and Long Island Sound for nearly 20 years. A

classic activist, he is a founding director of the Hudson

River Fisherman’s Association, and has led that organization

in many projects. Among their accomplishments

are stopping the mass slaughter of striped bass by the

lot; using for the first time the Freedom of

Information Act to uncover polluters; and bringing the

many organizations, and is president of the Long Island

Sound Taskforce of the Oceanic Society. He has written

many articles and made many public appearances communicating

the importance of volunteering, and created

the “Bag-A-Polluter” campaign that furnishes postpaid

cards for citizens to use in reporting pollution cases.

From Boyle’s Book: (Concerning oil spewing from a

Penn Central pipe in Croton-on-Hudson) “ What can be

done? There are several things. For one, there is public

pressure, and Art Glowka (an Easter Airlines Pilot) has

thought of a very effective way to mount public interest

convicted violator may collect up to $1,250 as a reward.

The cards have a simple entry form where a person can

write the name of the polluter, kind of pollution, time and

date, and any adverse effects noted. The Hudson River

A-Polluter cards and given them out free up and down

The Hudson River a Natural and Unnatural History by

the next few months I will be chronicling the origins and

history of our organization.